Share on FacebookShare on TwitterShare on PinterestShare on LinkedInShare on Email

The World Meeting of Popular Movements and Lent are two hefty subjects by themselves, but together? Mind blown…

For about four days, people came together from all over the world, from different walks of life, from different faiths, to speak for those whose voices need and want to be heard. Started by Pope Francis, the purpose of this Meeting is to “create an “encounter” between Church leadership and grassroots organizations working to address the “economy of exclusion and inequality” (Joy of the Gospel, nos. 53-54) by working for structural changes that promote social, economic and racial justice.” (http://popularmovements.org/). This is huge, and it happened right in our own Central Valley, in the city of Modesto.

Even the location, the city name is significant here! “Modesto” is Spanish/Latin for “modest, gentle, temperate” and that, to me, makes it all the sweeter that this international Meeting should happen there, because it takes humility to embrace other’s voices, to listen to them with compassion. Boast and arrogance have no place in this Meeting, what it stands for, and what it intends to accomplish.

But that doesn’t mean we don’t do anything after we’ve listened. Indeed, Jesus was a gentle teacher, but He was also firm, and never backed down from what He knew was good and true. He listened to those who begged, complained, asked, and then gave what counsel or direction He knew was best, which always involved an action: to one who asked how to possess eternal life, He said sell everything, give to the poor, and follow Me (Luke 18:18-22). Even Him just saying “be healed” is the use of a verb, why? Because being faithful (spiritual action), in the first place, is what led them to being healed. So no matter what, we are called to act. We have been called since the beginning, and are called again and again.

The Meeting was energized. No, it was charged with electricity…no…it was aflame with the desire for justice…no…what words describe it? It was powerful. It was emotional. It was heartbreaking. It was liberating. It was compassionate. It was righteously angry. It was many. It was one. Stories poured forth of experiences with injustice, from the Dakota Pipelines to the lead-waters of Flint, from the disabled immigrant to youth fighting for a few dollars, from cancer ridden homes to those trying to breathe. And the fire of change burned.

We listened to speeches and data on racism, migration, work and housing, land and the environment. We heard the words of Pope Francis, who began by saying:

“I want to encourage and strengthen each one of you, your organizations, and all who strive with you for “Land, Work and Housing,” the three T’s in Spanish: Tierra, Trabajo y Techo. I congratulate you for all that you are doing.”

Then we broke into small groups, reflecting and sharing our thoughts, stories, actions, and encouragements with each other. Truly, we were meeting together, engaging in the act of encounter that Pope Francis is always asking us to do. We were even called to be “disruptive” and then “rebuild” by Bishop McElroy of San Diego. Because ultimately, we weren’t meant to just sit idly by. One quote that I carry within is from Hebrews 12:4, which states: “In your struggle against sin you have not yet resisted to the point of shedding your blood.” It became even more real to me during this Meeting, as I listened to the stories of those who either personally or had witnessed this very quote coming into reality. Some actually have resisted injustice to the point of shedding their blood. And while I may not be called to shed physical blood, I feel confident saying anyone who intends to resist injustice, must at some point shed blood spiritually.

As is usual with events like these, we were urged to continue this passion, to keep the flame burning, to maintain the energy and inspiration after the Meeting was concluded. Indeed, we were like a ship at port, gathering supplies and knowledge, before heading back out to sea. This was preparation for the missions, tasks, and fights up ahead.

Which leads me to Lent, a preparation necessary to take before the ministry, to be able to deal with its burdens, torture, and death, pulling us through it all and resting finally in eternal life.

Lent is a time of reflection and prayer. To really get us to look at our lives and purge us of anything that does not align with God. To get back on track and temper our souls for the spiritual battle–sometimes also physical battle–we engage in.

I see the World Meeting of Popular Movements as a perfect beginning to Lent. I can’t speak for everyone here, so just speaking for myself, I feel I came away from the Meeting with a greater sense of ministry, a clearer view of what to do, a better understanding of how. Now that I know all this, I need to prepare mentally but most importantly, spiritually, in order to carry it out. And that’s why it’s so perfect that Lent occurs almost right after.

Fighting for what’s right, for justice and truth, is not and will never be an easy battle, because it’s so important and so crucial to who we are as children of God. As Pope Francis tells us in his encyclical Laudato Si’, we must “become painfully aware, to dare to turn what is happening to the world into our own personal suffering and thus to discover what each of us can do about it” (Paragraph 19). Pope Francis is reiterating Jesus when he said the ministry would be painful (1 Peter 4:12-13, John 15:18-20, 2 Tim 3:12 to reference a few). But it’s painful because we are doing what God would have us do, which is to follow Him, which is to be upright and just, and we are hurt by injustice, because it is an evil, that does not like goodness and does what it can to afflict it.

So I say again, that’s why it’s so perfect Lent comes after the Meeting. We need this preparation, this time of prayer and reflection, of tempering the soul, because this ministry will be painful, it’ll be a battle. 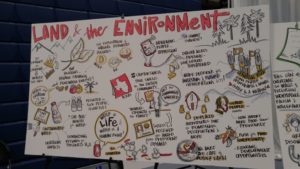 Share on FacebookShare on TwitterShare on PinterestShare on LinkedInShare on Email